When I look back, it’s kind of crazy to think of how I ended up here in LA, doing everything that I do now.

I wish I can say that I’m a full-time musician, and my idea of that is making a living on performing, touring, recording, and teaching drums/music. In the meantime, I do everything that I can to survive while following my dream. Right now, I work a part-time administration job for a musical theater company, I teach drumset lessons (I have over 10 students weekly,) I play in 5 bands regularly, and I do some booking and social media work for different bands and artists (including for some of my bands.) Every now and then I get hired to manage concerts and events. I blog about ramen for fun. I am pretty spread out!

So how did I end up doing everything that I do now? Well, it all started during a time I worked at a music store…

I’m originally from Rialto (a boring little town in San Bernardino County…) I worked weekends at a music store in Rancho Cucamonga, while I was finishing my bachelor’s degree at Cal State Long Beach. In 2010, I graduated, I had no music gigs, and I decided to work full-time over the summer. One day, I recognized a customer of mine who played drums at the church across the street from work. I asked him if they could use a percussionist. He was happy to have me join, although it was not a paying gig. I was happy to volunteer my time anyway because I just wanted to play somewhere! So I started playing percussion at the church every weekend.

At the end of summer, I got offered the Production Manager position for a chamber ensemble based in Pasadena, managing concerts and education programs. (I had done some stage hand work for them while I was in college.) I accepted the position, bought everything I could at the music store with my employee discount, then quit that job.

With my new job, I still played at the church every weekend. The drummer and piano player turned out to have a reggae band, SolRising, and invited me to play percussion for them. Flash forward… I still play in this band today, as their drummer now.

With SolRising, I had the opportunities to play reggae festivals, venues in LA like the Roxy, House of Blues, Key Club, Saint Rocke and more, countless parties and events, and a few weekend tours up and down the California coast. We’ve recorded an album together a few years ago and are working towards recording our next one.

At the church, I also met a singer/songwriter, Matt, who stole me a few months later to play at his church in San Dimas. He and I ended up having a lasting friendship and worked quite a bit together in music. We’ve performed as a band in local venues, we recorded two albums together, I still play church gigs with him a few times every year, and we still hang out, sing karaoke and go ghost hunting.

Playing with SolRising has been a great experience, and was a great way to get noticed. Because of my activity in social media, people saw that I was an active musician playing for SolRising… and blogging about ramen.

An old friend of mine and trumpet player from Citrus College, Max, had contacted me because he noticed my ramen blog. He had been checking out ramen joints near Santa Monica, where he lives, and wanted to meet up for ramen. I had not seen or heard from him for 3-4 years! He and I started hanging out a lot and became really good friends. Max also noticed that I have been playing with SolRising, so he invited me to play percussion in his reggae band, Bodhi Rock, when they started their residency at a bar in SM. I had a cousin, Michelle, that also lived in SM, so it was easy for me to stay out there for gigs. Max eventually convinced me to move to Santa Monica.

Not long after Max convinced me to move, my cousin Michelle’s roommate just moved out and she offered the room to me. I jumped on that opportunity quick! She had a one bedroom condo in Santa Monica, where the dining room was converted into a tiny bedroom. Rent was cheap for that converted bedroom so I didn’t mind having it.

On January 1st of 2014, I moved to Santa Monica. This turned out to be a huge turning point in my life, and an opportunity for me to fully pursue music.

From then on, I was playing regularly with Bodhi Rock. Max’s roommate, JohnPaul, saw me playing with
Bodhi and eventually invited me to play percussion with his funk band, Tang Gang. Being in this circle of musicians got me in touch with old college friends and I also made some new ones.

During a Tang Gang gig, I ran into an old acquaintance, a singer/songwriter named Daniel, who I had not seen for a few years. I met Daniel when he was writing songs for an all female cumbia/pop band I had played drums for (stories about this later…) It turned out, Daniel lived nearby, in Culver City. We also developed a lasting friendship and I started playing in his band. We play some really cool gigs regularly in LA, and go surfing together once a week.

Backtrack to my job in Pasadena – I still worked for them even though I had moved to Santa Monica. However, a few months after moving, I found out that they were downsizing. They didn’t have the budget to continue a busy concert schedule, as well as their education program. That affected my position directly… so I had to look for another job. I quickly found a part-time administrative position for a small musical theater company, just walking distance from my place. It’s a fun job, I learn a lot, they’re flexible, and my boss is really supportive of my music career.

I knew the income of this part-time job wasn’t going to be enough for me to get by, but that forced me to work hard on playing more gigs and teaching more. I’ve taken on different gigs with different artists and bands, recording, subbing, live videos, acoustic shows, out of town gigs, etc., I reached out to different people that could help me find more work (an old college friend gave me his teaching gig which I still do today, and another friend recently gave me his 80s cover band gig.) I took on other temporary streams of income when the opportunities came up (social media, artist management, booking, concert/event managing, promotional materials, etc.,)

Last year, I moved out of my Santa Monica place, and now live with awesome musician roommates in a really cool house in West LA… with a yard and a jam room!

It has been a little over 3 years since I’ve moved to away from home and I am halfway to being a full-time musician. It has not been easy and still is not easy, but I have to say that I am having the best times of my life and I feel so lucky that I am still here. I am constantly learning about myself and growing from my experiences, learning to trust myself and trusting that everything will work out, as long as I believed in my dream. I’m so thankful that I have a loving family who has always supported me in everything I do, and I have an amazing circle of friends. I would not be here if it wasn’t for them.

Anyway, this is me and I am happy to share my story and more with you. – Joan 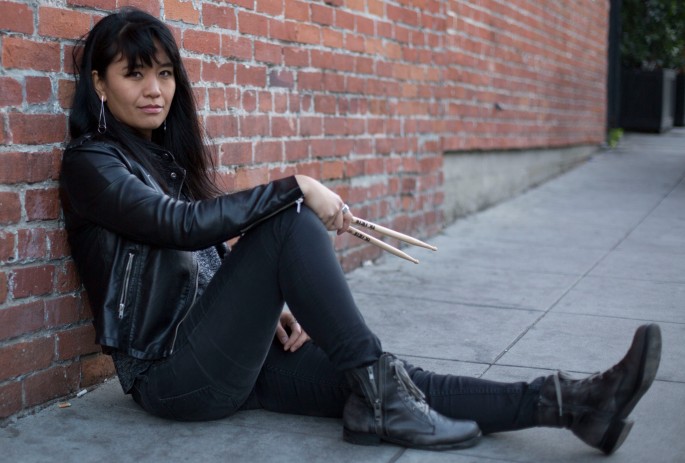 View all posts by joanquinto

2 thoughts on “How One Thing Led to the Next”